In July 2018 severe floods affected the southern Indian state of Kerala leaving many abandoned farm animals and pets in danger. Working together with the Red Cross, World Animal Protection visited the area after the floods to provide much needed cattle feed, and mineral mixture for left over animals. 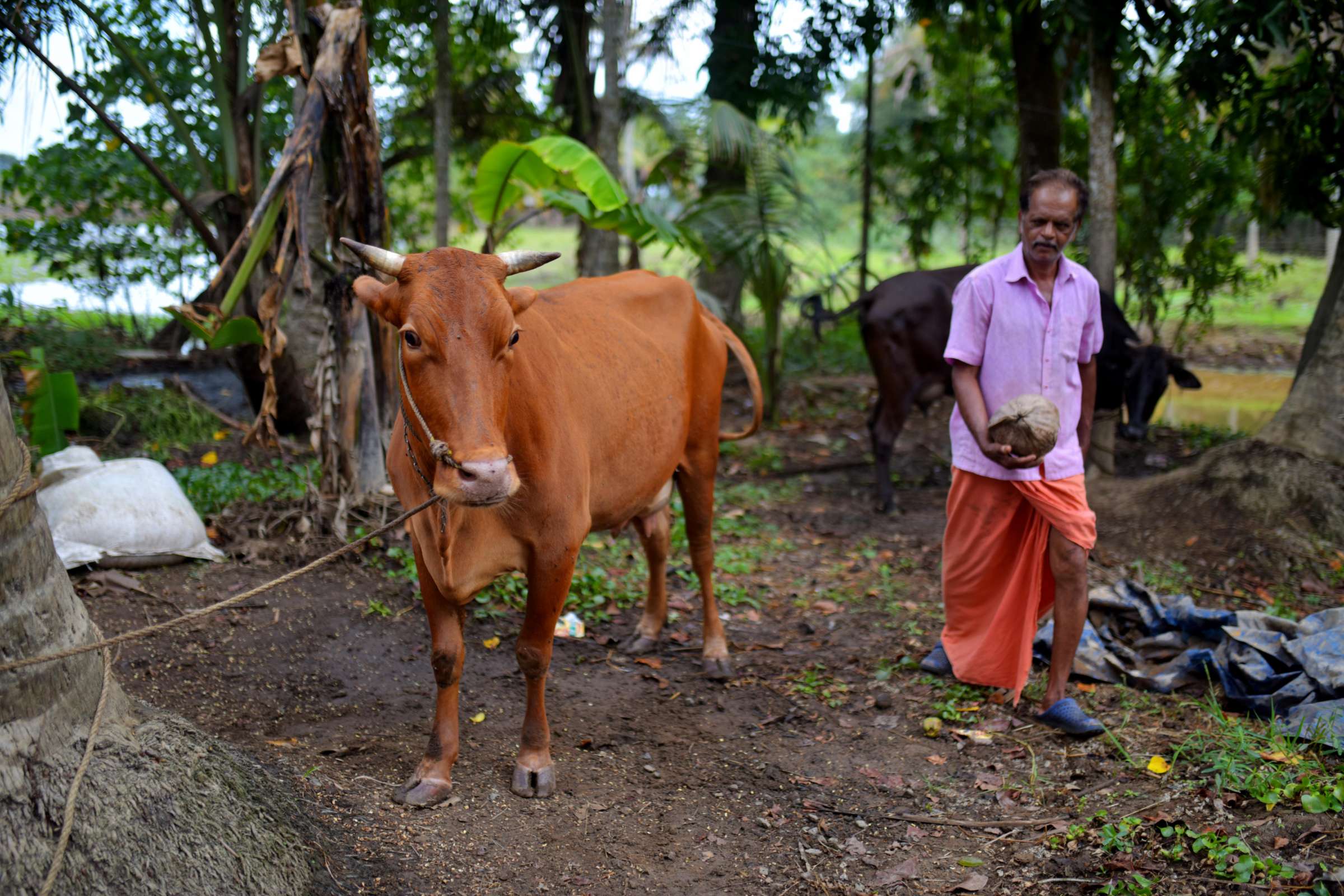 The Legal and Policy Framework for Animal Protection in Disasters: The Case of India

For Dalimiya and her family, her animals are her means of subsistence. They live in Dhemaji, which in Assamese language, Dhemaji means "the playground of floods", and they constantly suffer the effects of these events on their animals. The Government of India has taken significant steps in legislation to protect farmers like Dalimiya, who depend on their animals to survive.

In India due to floods alone on an average 97,000 cattle are lost every year as per the Central Water Commission’s data from 1953 to 2011.

Dalimiya (65 years) lives with her son, daughter in law and grandchildren in Dhemaji District of Assam in North Eastern part of India. They live along with their cattle, flock of geese, chicken and few pigeons. In Assamese ‘Dhemaji’ means “playground of floods” as the Brahmaputra river close to her village changes its course very frequently causing floods every year in unpredictable areas, especially between July and October. In India due to floods alone on an average 97,000 cattle are lost every year as per the Central Water Commission’s data from 1953 to 2011.

According to the statistics, 68% of India’s land is prone to drought, 60% to earthquakes, 12% to floods and 8% to cyclones, making India one of the most disaster-prone countries in the world, affecting overall 85% of Indian land and more than 50 million people. On an average, around 198 million livestock are prone to floods and 168 million livestock are prone to droughts annually.

Every year Dalimiya’s village gets flooded following days of torrential rain. She loses her birds, and sometimes even cattle which are devastating losses to the family. Livestock and poultry birds play an important part in the livelihood of Dalimiya and her family by supporting their agricultural activities, providing food (milk, egg, meat) and income to carry-out their day to day activities. The disasters effect on family economies are profound and they will very likely happen again. Due to such disaster events affecting thousands of villages, every year India suffers an average of US$1 billion in disaster losses. Direct natural losses amount to almost 2% of India’s GDP and up to 12% of the central government’s revenue[1].

Section 51A of the Constitution of India clearly specifies that “It shall be the duty of every citizen of India; (g) to protect and improve the natural environment including forests, lakes, rivers and wildlife, and to have compassion for living creatures”.

Hence, Governments need to integrate animal protection into the disaster and climate change related legislations, policies, plans and programmes and effectively implemented to ensure that the vulnerable animals and livelihood of poor farmers like Dalimiya are protected.

Section 51A of the Constitution of India[2] clearly specifies that “It shall be the duty of every citizen of India; (g) to protect and improve the natural environment including forests, lakes, rivers and wildlife, and to have compassion for living creatures”. This gives every individual in the country the responsibility to protect animals so that this can ensure that poor farmers like Dalimiya and their animals can have a safe and happy life.

In 2009 provisions for ‘Animal Care’ were included in the Section 7.10.1 of the National Policy on Disaster Management[4] which highlighted the importance of protecting animals from disasters. It states that “Animals both domestic as well as wild are exposed to the effects of natural and man-made disasters. It is necessary to devise appropriate measures to protect animals and find means to shelter and feed them during disasters and their aftermath, through a community effort, to the extent possible. It is pertinent to note that many communities have shown compassion to animals during disasters, and these efforts need to be formalized in the preparedness plans. The Departments/Ministries of the Government of India (GoI) such as Animal Husbandry and Dairy Department, Social Justice & Empowerment and the States concerned should devise such measures at all levels.” This policy statement evidently offers the scope and need for devising plans to protect animals from disasters at all administrative levels which can help millions of farmers like Dalimiya and their animals.

For more than 50 years, World Animal Protection has helped communities and their governments prepare for disasters by enabling people to protect their animals and their livelihoods. In 2013 World Animal Protection jointly with National Disaster Management Authority (NDMA) organized the National Conference on Animal Disaster Management involving all disaster management and veterinary stakeholders in the country to deliberate on diverse issues related to protecting animals in disasters. The Former Union Minister of Agriculture and Farmers Welfare participated and following the conference released the National Livestock Policy[5] which includes provisions for preparing contingency plans for livestock. It states that “Contingency plans will be prepared to maintain the productivity and welfare of livestock and poultry sector during various types of natural calamities and drought conditions. Such plans would primarily aim at improving veterinary care and making available feed and fodder through greater emphasis on fodder productivity and storage through silage or fodder blocks”.

The National Disaster Response Force[6] (NDRF) is a specialized force constituted for search and rescue of people during disasters. They shared that “families and famers refused to evacuate if their cattle were to be left behind. One farmer said, “what good is living if my means of survival is gone?”. In view of this since 2011 World Animal Protection has been engaging with NDRF and other stakeholders for organizing simulation exercises/mock drills in areas that are frequently prone to disasters. Because of this NDRF has successfully incorporated animal rescue into their operational procedure. In recent disasters NDRF has been involved in rescuing animals also along with people in India.

People like Dalimiya need to have information about impending disasters. They need a plan, they need community services and support so that when disasters strike, they know where to go and what to do for their animals. In view of this, World Animal Protection has been collaborating with the Government of India by providing technical support and recommendations. In 2016 NDMA included animals in their National Disaster Management Plan[7] and the Department of Animal Husbandry, Dairying & Fisheries’ also prepared their department’s Disaster Management Plan[8] which provides the responsibilities of the department to protect livestock, poultry and fisheries before, during and after disaster.

All these legislations, policies, plans and programmes are well appreciated but at the same time it will not matter to poor farmers and animal owners like Dalimiya unless they are effectively implemented to protect them and their animals from disasters. They need help to care for their animals, so they do not fall victim of the aftermath of floods. They need early warning systems and a safe place to take the animals when waters rise dangerously high. They want feed prices to remain stable after floods, so they can continue to feed their birds and livestock without having to sell some of them to feed the others.

Therefore, the World Animal Protection’s Animals in Disaster initiative is working with several national, regional and global stakeholders to help countries reduce animal losses following disasters and measure progress for families like Dalimiya’s, for the future of their children, grandchildren and towards achieving Sendai Framework Targets B and C and E.