World Animal Protection is in Kajiado County, Kenya assisting 80,000 animals suffering from an ongoing drought. Kajiado is one of the worst affected counties in Kenya, with the Horn of Africa experiencing some of the worst drought levels in decades. 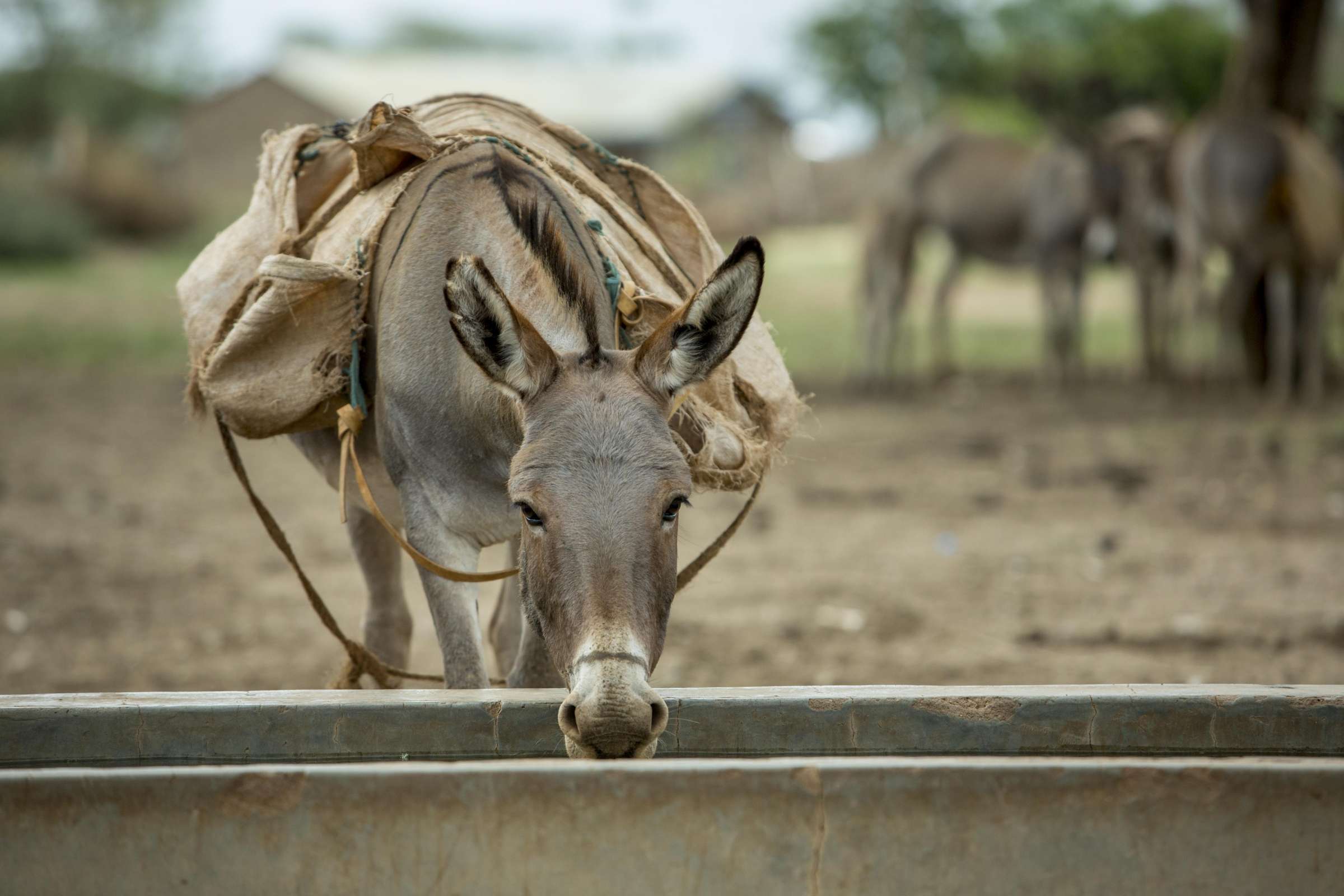 “I lost 25 cows and 30 sheep and goats in the droughts of 2016 and 2017. I had no feed and the rivers and ponds had dried up. Things were very difficult for me. I had to rely on my only my four donkeys to fetch water for my children from very far away distances. The work was difficult for the donkeys and three died of hunger, thirst and exhaustion” narrates Jane Ndegese, a 43-year-old mother of five living in Kajiado County in Kenya.

Like many other Maasai women in her area, Jane saw her source of milk and transport die due to drought in 2017. As the drought got worse she relied on her donkeys for transport to fetch water and to ferry charcoal to the market. With her milking cows having long stopped producing milk, the little money she got from selling charcoal became even more crucial for the survival of her family. In the Maasai culture donkeys belong to women and taking care of them is the sole responsibility of the women.

Two years of consecutive droughts, during the years 2016 and 2017, further worsened by El Nino in the greater Horn of Africa resulted in the drought in Kajiado County, Kenya. World Animal Protection responded by supplying hay, minerals and veterinary treatment for 87,000 cattle, sheep, goats and donkeys in April and May 2017. After the intervention, I visited Jane again to check on the condition of her animals. She led me to her animal enclosure and showed me how she had selected her lambs, kids and her female cattle to give them the hay and the mineral salts we had provided. The pointed to the sick cattle she had fed with the mineral salts. To my surprise, she neither fed her one surviving donkey nor did she give it any mineral salts.

I prodded her further to understand this while asking myself ‘why was the one animal that helped her so much to get through the drought, and that she had complete control over its care and handling get discriminated against and not get feed during a life-saving disaster response?’

A cost-benefit analysis following the Kajiado response showed that for every US$ 1 spent the economic benefit generated was US$ 13.5

A cost-benefit analysis following the Kajiado response showed that for every US$ 1 spent the economic benefit generated was US$ 13.5. This is a very impressive result. However, when one unpacks this figure and looks at how this benefit was distributed among different species – cattle, sheep, goats and donkeys – within the same household and within the wider area, a different picture is painted.

When it came to sick animals, 45% of cattle herders and 32% of sheep and goat herders selected them to be given hay. In contrast, only 4% of the sick donkey received any hay.

The animal species that got mineral salts was even more selective with most of the minerals being given to healthy cattle and only 14% of sick cattle 7% of sick sheep and goat and none for donkeys, sick or healthy.

Why is this significant?

The understanding of what contributes to disaster vulnerability in the humanitarian sector has evolved over the years to include cross-cutting issues like gender dynamics. This has led to gendered disaster responses in humanitarian and development practice. In the animal sector, species-based vulnerability and the role gender dynamics and other socio-economic considerations play during disasters is not as well studied. As a result, general correlations between human vulnerability and animal vulnerability are made. For example, animals belonging to poor households are more vulnerable then animals belonging to better off households. While in broad terms this is true, it also gives rise to the same problem the humanitarian sector faced in the past when they used only poverty to determine household vulnerability. By ignoring the role of gender invulnerability it led to what is referred to as gender-blind interventions.

Understanding how human gender dynamics can lead to animal species discrimination will help us better design response interventions and messaging to ensure that disaster responses are protecting all species and reducing animal vulnerability during disasters.

Gender dynamics does not only affect animals negatively. There can be positive impacts as well.

When Cyclone AVA hit Madagascar in January 2018, we found that poor families in peri-urban and urban areas in Antananarivo, own few mixed livestock and pets in a small area sometimes sharing the main human dwelling with animals. The cyclone affected the health of animals already living in poor welfare dwellings before the cyclone.

Rado Rabeherinirina, a 30-year-old man who lives with his mother Rarafiniary Rabeherinirina who is 55 years and his siblings. He values his poultry for three reasons - as a source of meat and easy cash.

“I sold 140 chicken immediately after the cyclone to buy food for the family” Rado explained.

The third reason is the significant income the cocks bring him from the illegal underground cockfighting sport. Because of this, Rabo went out of his way to protect the chicken from the cyclone. He hoarded up the chicken coops, relocated chickens to higher parts of the family house to protect them from rising flood water, and even prioritised buying chicken feed within the family’s budget.

This was a situation where fighting cocks and breeding chicken were favoured above the other animals within the same household. The man of the house took charge of the welfare of the poultry.

Understanding this species and gender dynamics and the impact on species vulnerability can help design messaging and interventions during cyclones in Madagascar.

Jane and her donkey in Kajiado, Kenya and Rado and his cocks in Antananarivo, Madagascar underpins that in order to develop animal disaster plans with appropriate interventions and preparedness messages, we need to understand how animal species are made vulnerable by gender dynamics and other socio-cultural practices within households in different countries and across different livelihoods.

World Animal Protection launched the animals in disasters (IAiD) initiative which is a set of tools that supports governments in the development of (1) animal disaster policies and plans (2) animal disaster funds and insurance with appropriate animal welfare considerations (3) capacity for veterinary disaster response (4) mobilising the public to better protect their animals during disasters. By being part of this initiative, governments and animal owners bring the Sendai Framework for disaster risk reduction to life for animals.

Click here for more information on the Animals in Disasters initiative