A dog sits outside a flooded house in Zoatlan, Nayarit state, some 150 km northwest of Guadalajara, Mexico. Hurricane Patricia made landfall on a sparsely populated stretch of Mexico's Pacific coast as a Category 5 storm, which authorities warned could cause floods and mudslides. 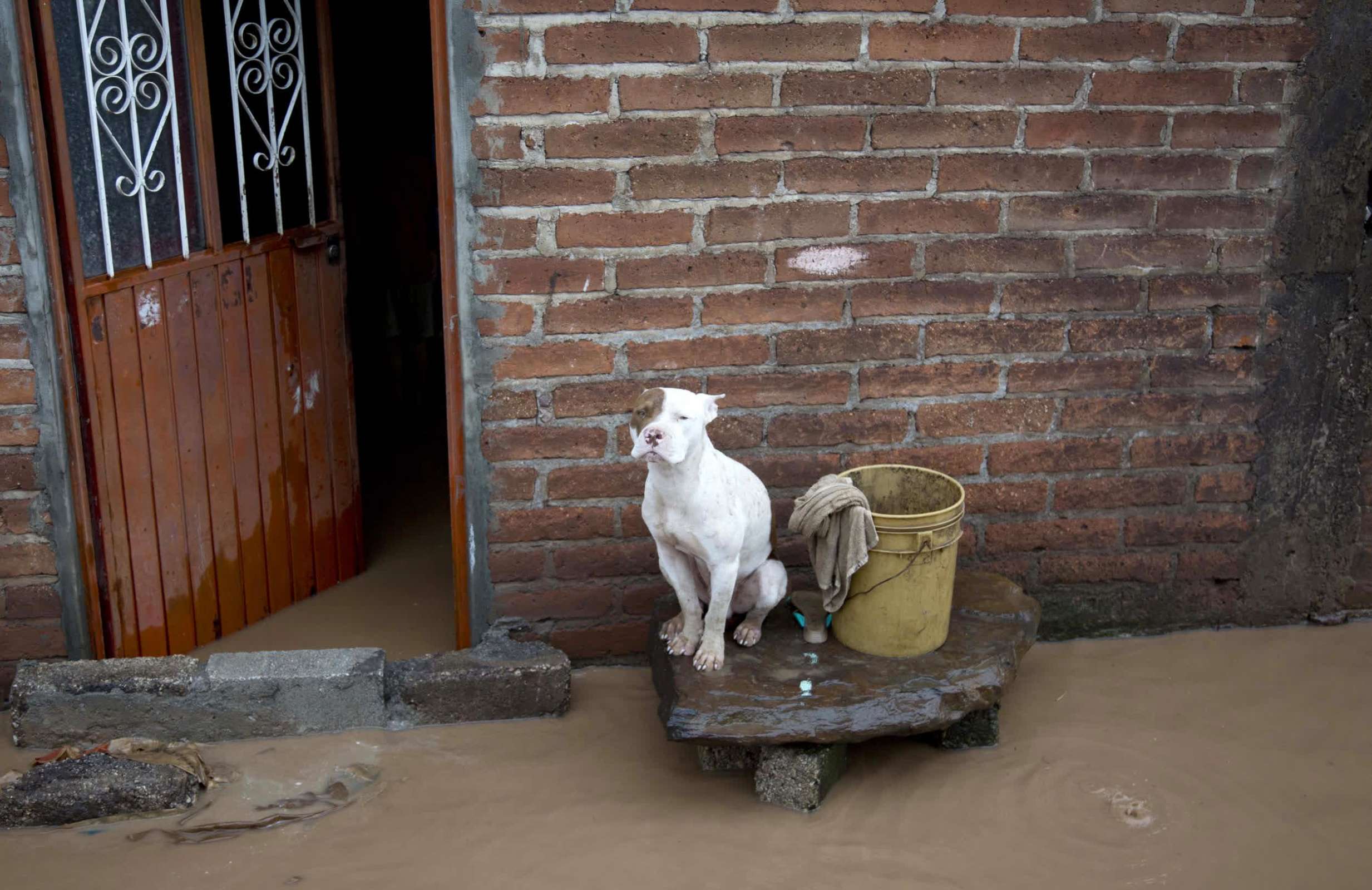 From the beginning of creation, our planet, like the other planets of the universe, has been subjected to incredible pressures and changes produced by events of different nature and origin, which are still being presented today.

Of a total of 373 registered disasters around the world. During the year 2010, the recorded death toll was 296,800, in addition to that about 208 million more people, suffered affectation of diverse nature and magnitude

From the beginning of creation, our planet, like the other planets of the universe, has been subjected to incredible pressures and changes produced by events of different nature and origin, which are still being presented today. We call them "events" because, according to the International Strategy for Disaster Reduction of the United Nations, the definition of the concept of disaster refers to a severe interruption of the functioning of a community or society that causes loss of life and material losses, economic or environmental. All of the previous, exceeding the capacity of the affected community or nation to deal with the situation using their resources. A disaster is a function of the risk process. It results from the combination of threats, conditions of vulnerability and insufficient capacity or measures to reduce the negative and potential consequences of the risk[1]. That is, we only talk about disaster when there is an impact on the human population, therefore, when people or their goods or services are not affected, those incidents are classified as events only.

Among the most common events due to its occurrence, we can mention those of natural origin that are classified as hydro-meteorological, such as tornadoes, hurricanes and droughts; as well as those that derive from these, among which are mentioned rapid and slow floods, blizzards and in the case of droughts, the consequent desertification processes. In another order, some authors cite biological ones, which manifest themselves as outbreaks of diseases (epidemics) and insect pests such as locusts[2]. Another large group of events is that of geological events, such as volcanic eruptions, earthquakes and tsunamis. Not everything is black and white on this subject since the previous ones joined by the mixture of both groups, which manifests itself in landslides and liquefaction.

But we cannot stop there, since, after the appearance of the human being on the earth, it adds "progress" to its everyday life, and with this progress, other events of non-natural origin occur and are known as anthropic - caused by man. They are classified as wars, technological warfare -including those of chemical, biological, radiological, highly explosive and nuclear origin; also, those incidental as vehicular, aviation or marine-, as well as civic-social type.

According to data reported by the Center for the Investigation of Epidemiology of Disasters (CRED, for its acronym in English), cited by the Pan American Health Organization, in its Bulletin "Disasters"[3]; of a total of 373 registered disasters around the world. During the year 2010, the recorded death toll was 296,800, in addition to that about 208 million more people, suffered affectation of diverse nature and magnitude, whose economic losses ascended to almost 110 Billion of American dollars. The region of Latin America and the Caribbean took the lead in the statistics, mostly due to the impact and high rate of fatalities that the earthquake in Haiti, which reached 75% of the total deaths. And also led the economic figures since only the earthquake in Chile, produced 30 billion US dollars in damages and losses.

Animals are not alien to the subject of disasters, their impact on pets and production animals is even more devastating than that in humans. Generally, animals are not allowed in temporary shelters for people, which, along with the fact that owners usually do not have enough time to make arrangements for the care and safety of their pets before the disastrous event, further aggravates their situation; This forced us to leave them behind, meaning in many cases a slow and painful death.

After the evacuation, the animal owners tried to return to the area of impact, at the cost of their safety and motivated to attend or recover their animals left behind. This situation adds an element of crisis to the current one since it forces the authorities to stop them or send them back to the rescue bodies to search for and bring back these people. The survival of very dear pets or precious livestock will always depend on the preventive plans that their owners develop in advance, and not on rescue operations[5].

In the province of Santa Fe in Argentina, due to periodic flooding of the Paraná River, according to Alejandra Celis, a researcher at the National University of the Litoral, the region has 3,520 records of disasters between 1970 and 2004, which means 22.68% of all events that occurred in the country in the same period of time. 88.4% of these events were hydro-meteorological[6].

The adverse effects in these thirty-five years include (and perhaps are not limited to) approximately 1000 human deaths, 21 450 patients, more than 8000 injured, 1 000 000 evacuees, 5.3 million victims (1 of every 134 inhabitants evacuated from the region) and 1.71 million lost livestock. All this, entirely preventable if an emergency preparedness plan had been developed.

The consequences of the lack of plans are not limited only to the loss of animals, and it also implies the activation of other instances to solve emerging problems, as seen in New Orleans in the USA. During the emergency caused by Hurricane Katrina, where the Federal Emergency Management Agency (FEMA) forbade the evacuation of animals with subsequent judicial implications.

When the Chaitén Volcano in southern Chile erupted, the authorities did not allow the residents to rescue their animals immediately, so public opinion lifted, and the National Parliament intervened before the Congress to obtain the approval of a rescue project. World Animal Protection (formerly known as the World Society for Animal Protection - WSPA, for its acronym in English), in coordination with the Government and local animal protection groups, organised the rescue and evacuation of hundreds of animals, in addition to the Donation of more than one ton of pet food. Unfortunately, although there is no official figure, thousands are speculated on the number of animals that lost their lives due to the delay.

As just became evident, World Animal Protection, through its Department of Disaster Management, has come to alleviate a vacuum in the field of rescue and animal care during this type of emergency; and has intervened in numerous operations over the past few years.

After the earthquake in Haiti, in January 2010, World Animal Protection led a coalition that, in collaboration with the Government and the Haitian people, medically treated more than 60,000 animals, organized the reconstruction of the National Diagnostic Laboratory and rehabilitated the cold chain of the country with the installation of 12 solar units in the areas of most significant impact of the earthquake[7].

During the emergency in Japan due to the earthquake and tsunami, this organisation envisaged the construction of 30 temporary shelters for pet care that managed to evacuate with their families.

After quantifying the structural and economic damages, the emotional impact caused by the disasters is added, which disorganises the cognitive and emotional aspects of the individuals, deteriorating their capacity for attention and concentration, the feeling of anxiety and helplessness grows, it combines with feelings of anger and sadness. Those that, on occasion, are covered up by defence mechanisms, such as denial, giving a decrease in the ability to feel or face unpleasant external circumstances[8].

To better understand the emotional impact of disasters on victims, we must study the factors that affect individuals, as is the case of the loss of both companion and production animals. Human beings form very strong bonds with our animals, to the point that, in the fact of losing our companion animals, the mourning is equivalent to losing a member of the family, and in the case of their animals of production, not only the affectionate aspect as the uncertainty in the future for having lost the means of economic support. In addition to other factors such as the type, magnitude, duration and impact of the event; as well as the age of the individual and their perception and experience regarding this type of situation, taking into account the extent and nature of damage suffered by the person: family, individual consequences-injuries, loss of property and animals, economic and other nature-[9].

Finally, another group of victims suffers as much or more as a result of disasters, it is the assistance personnel, and this syndrome is known as "Compassion fatigue". It has its cause in the constant emotional pressure when facing daily painful situations. It is quite common among the staff that cares for animals because, in addition to the common pressures of the emergency, this staff also faces with making ultimate decisions such as "triage" (the process of selection and categorisation of victims) and euthanasia. It is characterized by excessive guilt, inexpressive emotions, isolation, many complaints of its management, criticism of the management of others, various addictions, compulsions, under personal care, legal problems, indebtedness, nightmares, regressions, apathy, digestive and respiratory problems, sadness, lack of concentration, physical and mental exhaustion, worry and denial of the situation[10].

In summary, it is necessary always to be prepared with a family emergency plan and provide the required and professional support to victims and assistance personnel.