Heavy rains caused flooding and rivers to overflow in the Northern part of Heredia province in Costa Rica. A World Animal Protection response team went to provide basic aid and feed for stricken animals. Pictured: a cow swimming in flood water was carefully steered by the World Animal Protection boat and made it safely to dry ground. 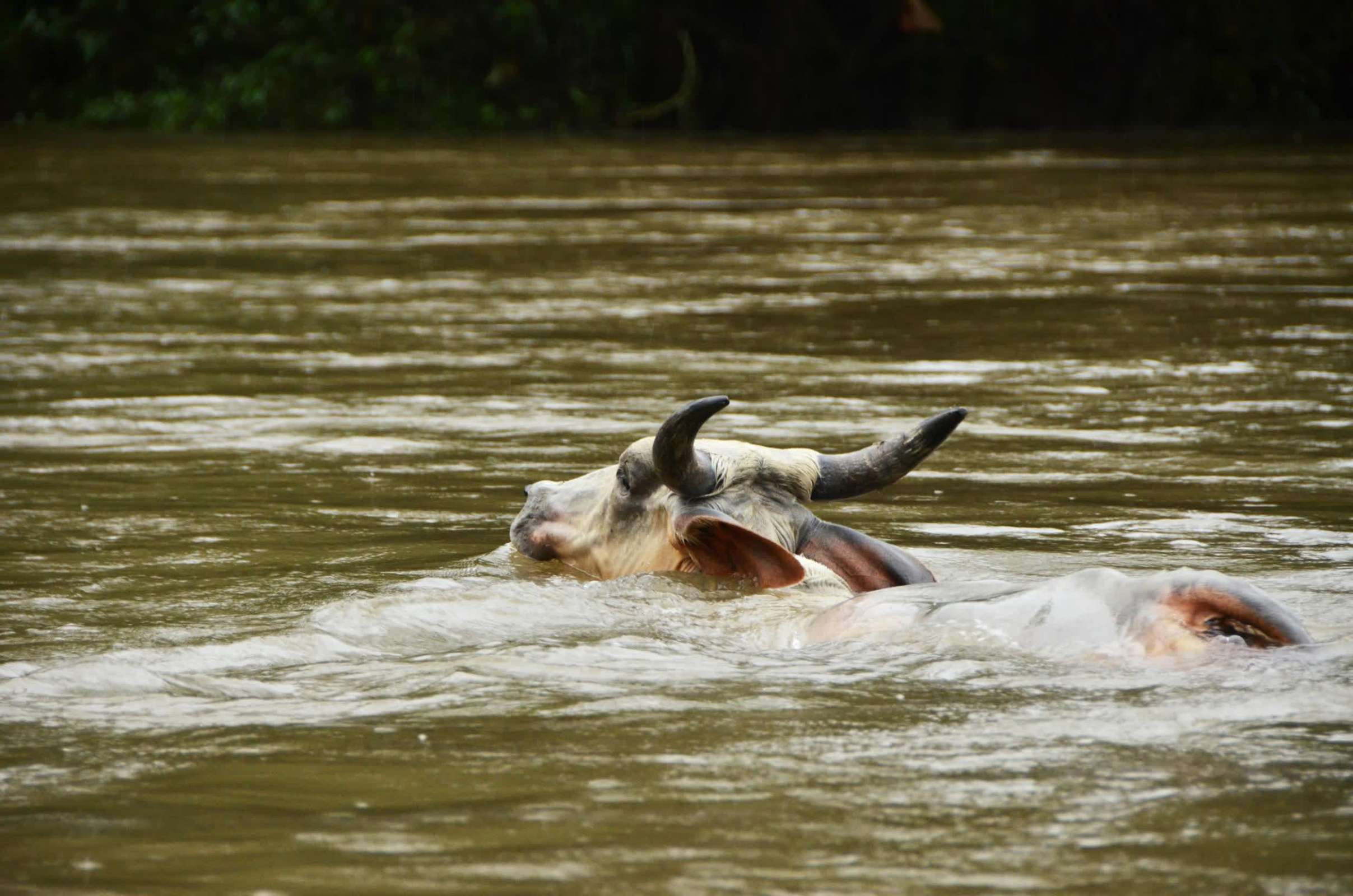 According to the World Veterinary Association, more than 70% of the world’s most impoverished communities depend on livestock for milk, meat, eggs and income.

As it happens every year, the month of June means the official beginning of the hurricane season in the Atlantic-Caribbean Region, and although fewer significant hurricanes are expected this year, this does not mean that their severity will be less.

To tell the truth, this is not only a seasonal climatic phenomenon, but it is the sum of many social, political, economic, cultural, and a wide range of other factors, which create conditions that hit on livelihoods and directly on animal welfare. These factors are even more harmful than the mere impact of heavy rains, floods, and the destruction of road infrastructure and productive.

Last year, after the landfall of hurricanes Irma and Maria, most countries in the Caribbean suffered a severe impact in their economies, leading to an almost complete halt as a consequence of the destruction of roads, bridges, and public utility systems. A significant example of this impact is the agriculture in Dominica, which was devastated, up to a 100% loss of crops and substantial destruction to productive trees and death of livestock. Another example is Antigua and Barbuda, where the combined value of destroyed assets and disruptions in the production of goods and services is equivalent to about 9% of the country’s GDP in 2016.

Although authorities, together with local animal protection groups and owners, are delivering food, primary veterinary care and even rehoming to animals left behind in this island; Barbuda remains uninhabitable, and permanent returns will not be possible until water and sanitation supplies are restored. Although the economy in the British Virgin Islands, relies mostly on tourism, there is a significant but undetermined number of pets and backyard animals, which were severely affected, due to the extensive damage -approximately 95% of all small coastal properties on the northern and western section on the island of Tortola destroyed or reported severe deterioration. Public services and transport activities in most of the territories were severely hampered, including secondary roads, which are critical to access arable land, remote locations and transport labour and agricultural products to markets and ports.

In summary, as part of Irma and Maria impact, over USD $ 5 Billion is required to fulfill the recovery needs for Dominica, Barbuda, and the British Virgin Islands.[1]

Most of the injuries and deaths of animals during hurricanes are caused by flying debris, drowning or by being swept away by flash floods or strong winds. To avoid this impact on livestock is vital to leave the animals outside, so they will have more chances to survive, and after stress, they will need clean feed, a dry and safe place to stand, and clean water. Also, support with electrolytes and vitamins will help them in returning to normal. Younger animals are more susceptible to stress than older animals and may need more care.

Having said that, as most damage to buildings, pens, and animals comes from wind and flying objects, the ability to protect them in advance from these dangers dramatically reduces the chance of injury to livestock.[2]For this reason, it is essential to build or rebuild reinforced and wind-resistant structures, located away from floods’ path, implementing pre-hurricane evacuation plans and training animals for secure evacuation procedures.

We, at World Animal Protection’s Animals in Disasters programme, understand and share the suffering of thousands of animals affected by hurricanes. In an attempt to deliver hope to their owners in distress, we offer preparedness information, case studies and catalyzing solutions through our website www.animalsindisasters.org, where resources like the online course PrepVet can be found, which provides general information on Disaster Risk Reduction, Climate Change, Emergency Management, and Animal Welfare.

Please visit our site, prepare an emergency plan, and #don’tForgetThem.