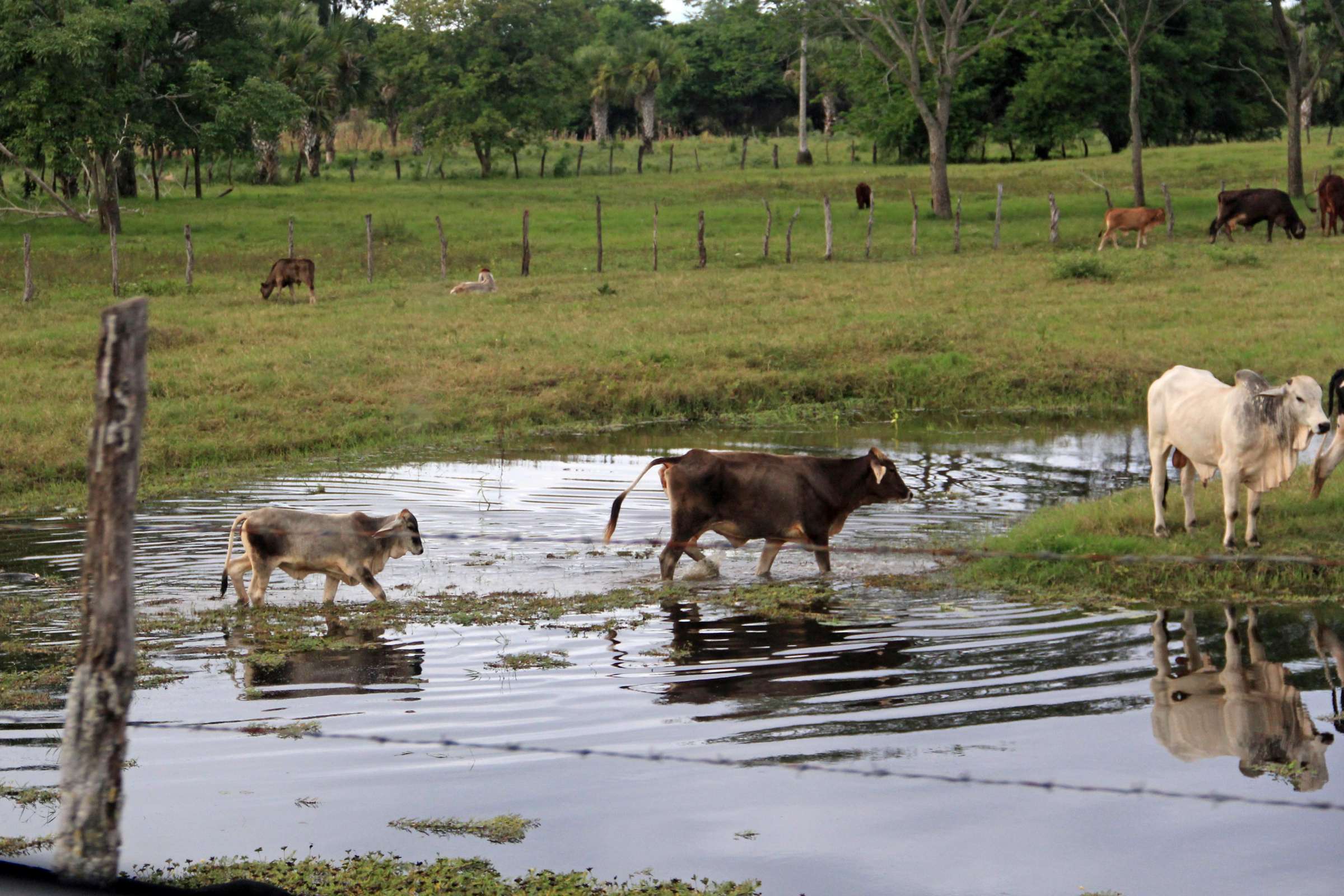 Our partnership with the Mexican Red Cross is helping to protect the people and their animals in impoverished farming communities affected by severe flooding in Tabasco State.

We have to think about our livelihoods. The animals in our communities are our livelihoods, they are our savings. In the city animals are pets. People keep their savings in banks. Ours is not in a bank. Our savings are in the form of a cow or chickens; both are worth a lot for us and must be kept well. Yngrit Pérez, Tabasco

While emergency disaster response prioritises the immediate needs of affected people, risk reduction plans sustainably address a community’s medium and long-term resilience and recovery. Effective risk reduction involves analysing and mitigating the many damaging effects of disasters that extend far beyond the initial event. For people and regions that rely on animals, it involves a ‘big picture’ approach encompassing the welfare of both people and animals. Our partnership with the Mexican Red Cross is helping to protect the people and their animals in impoverished farming communities affected by severe flooding in Tabasco State. The partnership developed from our Memorandum of Understanding (MoU) with the International Federation of Red Cross and Red Crescent Societies (IFRC) and was part of a flood resilience programme in the region.

In the Municipality of Jonuta, where we focussed our work from 2014-2017, 59% of people live below the poverty line. And 80% of communities depend heavily on their animals for subsistence and income. Chickens are the main source of nutrition and income. The region is regularly and intensely flooded because of climate change. Before we stepped in to help, 70% of chickens in our target communities were dying of drowning and disease in the floodwaters. And with the land submerged for up to seven months a year, farmers could not reliably grow crops to feed their families and their livestock. Unable to depend on their crops and animals for food and income, people were forced to buy what they needed from grocery stores; driving themselves further into poverty. Our approach With the Mexican Red Cross we developed a project that focused on protecting a total of 20? Tabasco communities and their animals from flooding.

To protect chickens from the rising flood waters we encouraged farmers to use poultry racks. These versatile pyramids of staggered boards – 20 cm apart – allow birds to follow their natural instincts to escape the flood waters and perch. Each board can be used as a platform for feed and the animals can shelter underneath.

And if they are arranged in the right way, they can provide shade throughout the day. The racks are adaptable – they can be designed in many different ways depending on the location, the farm, the size of the flock and the age of the birds. They can be built next to a farmhouse or other buildings allowing the birds to climb on to the roof. Farmers found that chicks readily adapted to using them.

Farmers were provided with training and materials to build the structures. During 2017, 546 poultry racks were built in 10 communities, saving the lives of at least 2,500 birds. This was done throughout a 3-year project and under Red Cross budget in 15 communities.

Through the project, aquaponic systems were also developed and used by 7 farmers in 3 communities. The systems provide farmers with an alternative food source for their families and animals until their pastures can recover. Recovery can take around two months after the flood waters subside.

Crops grow very quickly – twice as fast as those in soil. This solution means people can feed their families when floods prevent conventional farming. It also provides an income as excess crops, fish and fodder can be sold at a greater price as they can produced off-season and special greens with higher value.

The systems are simple, affordable and environmentally sustainable. They recycle and filter water and use the nutrients from the faeces of the fish farmed in one tank to grow plants in another, the water gets cleaned by the roots and goes back to the fish over a cycle.

By the end of 2017, 3 aquaponic systems were being used by farmers; other systems did not continue their work due to lack of commitment.

The project’s success has inspired the Mexican Red Cross to encourage poultry rack and aquaponic systems use in other Mexican communities as part of its flood resilience programme.

Along with the project there was another activity related with DRR aiming to create greater conscience among those decision makers whom also are part of Tabasco activities.

The MX30 drill was conducted during the event marking the 30-year anniversary of the 1985 Mexico City earthquake. World Animal Protection was part of the simulation and contributed a veterinary mobile clinic as well as risk reduction videos and advice to the public. Further, a public awareness campaign in public parks targeted pet owners outside the drill location itself. This was well-received by the public as well as our key partners in Mexico.

As our work in Tabasco and globally shows, disaster risk reduction planning that integrates the welfare of animals and the people who rely on them can:

Our long experience in the field of disaster management has shown us that helping animals help people. It demonstrates that integrating animals into emergency planning and disaster risk reduction measures is fundamental to achieving effective social, economic and environmentally sustainable outcomes. This integration will help the world meet the Sustainable Development Goals (SDGs).

The SDGs adopted by the 193 member countries of the UN in 2015, is a world-moving opportunity to address the problems disasters cause to people and their animals. By 2030, all countries must have adapted their policies, legislation, regulations, and budget allocations to achieve goals that are unprecedented in their scope, ambition, and significance.

As global leaders in animal disaster management, we used our expertise to negotiate recognition of the tight links between animal protection and the following SDGs and targets.

• Goal 1 – End poverty in all its forms everywhere

These tight links are increasingly understood, recognised and acted upon within the humanitarian and global development communities.

World Animal Protection has more than 50 years’ experience of helping people help animals in disasters. We partner with local and national governments, inter-governmental and non-governmental organisations, and communities to deliver expert emergency responses, world-leading risk reduction and preparedness planning. Together we find the best possible solutions for animals and people alike.

In Mexico World Animal Protection deployed several times along the years during earthquakes, volcano eruptions, floods and/or simulations with federal and state civil defence groups and academia at Jalisco and other states. We constantly provided the tools for risk management at response workshops, and currently there are veterinarians working in higher posts at these civil defense departments which help promote the protection of animals during emergencies and during their own simulations.